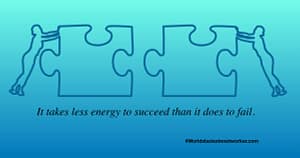 Is there an MLM Success Shortcut?

It turns out that there is but it really requires a change of thought.  MLM Success Shortcut is easy. The changing of our minds?  Not so simple for most of us.

Too bad I was just a 22-year-old kid when a blessing was laid in my lap.  My first job out of college was working for Combined Insurance and I was whisked away to Chicago for my training.   The company was started, run and owned by W. Clement Stone.

This is important because Stone made Napoleon Hill famous along with his, (still), incredible study, Think and Grow Rich.  This is important to know about Stone – he built the largest and most successful sales force in history.   Moving his life from 33 years old with a hundred bucks in his pocket to billionaire.  (Not a typo, billion with a “B”)

I guess, in a way, I’m a dinosaur.  One of the last guys/gals trained by Mr. Stone directly.   Anyway, even though I was a kid and way too young to appreciate the greatness of the guy, he was so powerful that it some of it “stuck”… although very little was applied then.  Stone was HUGE on application – good trainers are.

Once I got serious about MLM and was looking for that one MLM Success Shortcut, I knew where to turn.

Stone proved and later, (after a couple years of earning great checks in the 90’s) I also proved it takes far less energy to succeed than it does to fail.   This is the tiny shift in our minds we must make to understand and capitalize on the MLM Success Shortcut.  So let me repeat it.

“It takes less energy to succeed than it does to fail.”

In studying Stone’s books, “Success Through a Positive Mental Attitude” and “The Success System That Never Fails” and applying the principles, the business grew and it took way less energy.

Anyone who thinks MLM is about sponsoring more people and learning how to be a sponsoring machine is the MLM Success Shortcut really needs to read next part 3-5 times.

The objective of the business is to get more people sponsoring, not to sponsor more.

All the absurd nonsense about sponsoring 20 people a month is just bullshit from the pied-pipers of prosperity … so they can sell their crap.   And, sorry gurus, it’s crap.

When we sponsor someone we do so by implying, directly, that we will help them in the business.  There is no way, absolutely no way, anyone can sponsor 20-30 people in a month and give them the kind of support new people need… if they are working full time.  Since most people (91% according to the DSA) work parttime, helping 20-30 people is a physical impossibility.

The objective?   Get more people sponsoring and coaching people to be able to sponsor people, working with them hands-on.   3-4 hours a week times 20 people amount to 60-80 hours a week.   Gimme a break.   And, that would leave no time to continue to recruit and sponsor yourself!   Good grief.

Reading Stone and Hill led me to the inescapable conclusion that I needed to learn how to be a better hands-on coach.  They, Hill and Stone, did not suggest nor recommend specialized knowledge from AUTHENTIC experts, they said it was mandatory.   Best coach ever?   John Wooden

Oddly enough, not only did I become a better coach by putting the Wooden principles in my quiver, I found the MLM Success Shortcut.  It was and still is, called honesty with oneself… along with a little growing up.

You see, and this is a promise, if you have read this far in this post and understood most of it, you have more than what it takes to build a business big enough to exceed the funding you’ll need to manifest your dreams.

Wooden taught that “things will work out as the should,” (here comes the hammer), “provided we do what we should”… wow.  Grow up, Mark, is what that said to me.  I did.

Coach drilled down deeper on this point. “I think our tendency is to hope things work out the way we want them too much of the time but we don’t do the things that are necessary to make those things become a reality.”  Guilty,  ouch!

ONE:  Understand that the energy generated when we do the very best, every day, is far different than the energy lost when we do not do our best.   Change your mind to this truth.

TWO:  Spend 80% of your time that you devote (key word) talking to people who are not in the business for yourself and your teammates.   We should make a minimum of 15 dials an hour and keep improving, inch-by-inch your skills.

THREE: Yeah, I know I said 2 things…but in today’s world, let me toss this in too.  For goodness sake, success has a price and it is not being distracted by all the magic systems, secrets, events and lead generators out there… in a nut shell?

Where your attention goes, your energy flows.   Pour it into work, the rewards flow to you…

Really want the whole story?   How to be successful?   This is from Coach Wooden and, just a quick reminder or in case no one has told you… sponsoring is easy, coaching others to success is another ball game.   So why wouldn’t you give yourself a break and learn how to coach others to success?

Take 17 minutes now.  Are your dreams worth 17 minutes?   I believe they are but it is your choice, not mine.

See, Wooden taught something other coaches STILL DO NOT GET.   He never tried to build championship teams… he built championship people.   Be one now … and I’d love to know what you think.